Her first band “LEAP” (herself and Bill Hartley) started in Philadelphia and released 2 original CD’s. They moved out West to Los Angeles and many of those songs were placed on MTV shows, which started Nicole’s successful pursuit of many film/tv placements of her songs. LEAP played in clubs and on TV shows but when Bill decided to move, Nicole started writing solo and with other writers. It was around this time she met her first solo band members Johnny Hawthorn (Everclear, Toad the Wet Sprockett) and Randy Guss (Toad the Wet Sprockett). They recorded a CD, “Lady like me” with Ed Tree producing and started playing LA clubs opening for acts such as Sophie B. Hawkins, The Motels, Colin Hay (Men at Work), and Shaun Colvin. Nicole also started playing in a bluegrass trio that led her to Nashville for songwriting and showcasing, and recording with Dave Merenda (“I will remember you” Sarah McLaughlin).

All the while, Nicole was an in demand session vocalist. She has recorded over 500 songs for other songwriters and recorded back up on many artists records happily!

She also started writing songs with composers (Ernest Troost, Blake Neely, Steve Edwards) which were placed in films and major Television network shows (The Office, Felicity, Brothers and Sisters, Everwood). In 2014, Nicole hooked up with Marty Axelrod and wrote and recorded a critically acclaimed concept album called “Songs of Shiloh”.

“Got the car running is magnificent! No other word will do. Gordon’s aching, sweet, & soulful voice drive the story forward… this is an emotional, beautiful, and rewarding album and a certain for 2007 Top Ten lists!”  -  Maverick Magazine

“’Songs of Shiloh’ is an emotionally affecting cycle of pop songs with pure melodic appeal and lyrical specificity. There’s the shivery beauty of Gordon’s voice, which echoes that of Sarah McLachlan and Kris Delmhorst.” - Pasadena Weekly

It was also around this time, Nicole was ready to make her next solo CD. She teamed up with Johnny Hawthorn, Jamie Rounds, Alex Kharlamov & Kevin Jarvis (Mark Olson, Ben Vaughn) to record “All My Change”. Nicole and Kevin spent the summer in his Venice, CA studio along side some great session players including Duane Jarvis and David J. Carpenter and finished what would be the first of their 2 CD collaboration. “It all begins with a song” landed in a prime spot on the hit ABC show, “Brothers and Sisters”.

Nicole met and teamed up with Rob Feinfield and his cousin Barry Goldberg (Bob Dylan, Electric Flag) to write and record her next CD, “Long Time” at Johnny Lee Schell’s (Bonnie Raitt) Ultratone Studio in Studio City, CA. “Long time” features a who’s who in classic rock including Jim Keltner, Paul Barrere, Bob Glaub, Hutch Hutchinson, Gary Mallaber and was profiled on the local ABC station as well as in the gift baskets at the 85th Annual Academy Awards!

Nicole recorded a Christmas CD (A Midnight Clear) with Steve Edwards in his Pacific Palisades studio and another solo CD, “Caught Up” with Kevin Jarvis, all the while playing in the southwest, doing session work, and teaching Vocals and songwriting at Musicians Institute in Hollywood, CA. Nicole wrote and recorded with Gerry Goffin (Will you love me tomorrow) and Mike Stoller (Stand by me) in LA and frequented Nashville for gigs, sessions and songwriting with such writers as Gary Burr.

Nicole has appeared as the singing voice of a main character on The WB network’s show Everwood. She has performed on The New Gong Show (Cartoon Network), The New Star Search (recorded at The MGM in in Las Vegas), Eye on LA (ABC Los Angeles affiliate), The 10 Show! (Philadelphia NBC affiliate), sung the National Anthem twice at The Los Angeles Dodgers Games, sung live at The Egyptian Theater in Hollywood with an 11-piece live orchestra, a 3-person live Foley sound effect team! Her songs have been featured on Luftansa Airlines in-flight entertainment and in Regal Cinema’s pre movie entertainment! Nicole has performed her songs as a featured performer at The Sundance Film Festival and The Americana Music Conference.

Nicole currently resides outside of Philadelphia, PA where she continues to write, record and perform.

The Young & The Restless

As the World Turns

Visit Me on Social Media! 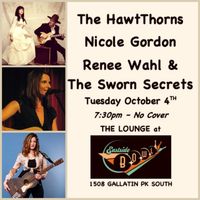 Nicole Gordon and The HawtThorns

So excited to reunite with most of my LA band! Jeff and Laurie LeGore and Johnny Hawthorn. We will open for Johnny's new band, The HawtThorns